Shining a spotlight on bushfire monitoring 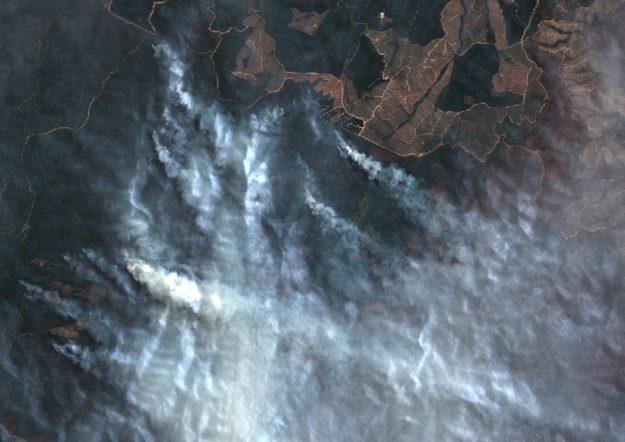 Parts of the Victorian bushfires on 30 January 2020, taken by the Sentinel 2A satellite at 10m resolution in true colour. Credit: Geoscience Australia.

In a nation as vast as Australia, natural disasters of one kind or another are almost a monthly occurrence — floods, cyclones and bushfires. Our country has seen many devastating examples of the latter in the past couple of decades, and the problem large-scale bushfires is only going to become worse as global warming really begins to bite.

It is in the hope of improving emergency services’ bushfire response that the Digital Earth Australia Hotspots system came into being. Born out of a collaboration between three government agencies, it was established in response to the devastating fires that swept through New South Wales and ACT in 2001, when it was identified that a system to detect and monitor bushfires was needed.

To find out more about the world-leading program, we spoke with Maggie Arnold, Project Manager within the Operations team in the National Earth and Marine Observations Branch at Geoscience Australia. Arnold is responsible for delivering and maintaining the organisation’s mission critical applications, such as Digital Earth Australia Hotspots, and managing data production pipelines and delivery for marine data. 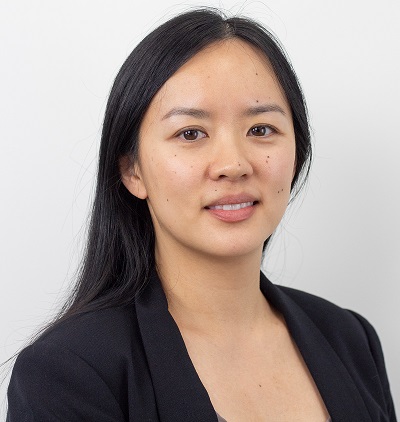 How did the project originate?

GA also works with the Bureau of Meteorology to access data from the Japanese Meteorological Agency’s Himawari-8 satellite to produce 10-minute Hotspot updates and near-real-time (NRT) imagery. DEA Hotspots also includes DEA’s NRT Analysis Ready Data (ARD) imagery, which is derived from the European Commission’s Sentinel 2A and B, which updates every 4 to 5 days.

Who uses the system?

A diverse group of emergency management professionals access data from the system, including responders and managers, as well as researchers and the general public. They use DEA Hotspots data and web services as operational data feeds to inform situational awareness and monitor and manage assets, such as electrical infrastructure, transmission lines, and validate hotspots against other sources of data, for example, lightning strikes.

Has there been much development of the system over the years?

DEA Hotspots has developed from a system based on dial-up and broadband technology, to one of the first exemplar cloud-based mission-critical systems at GA with almost 100% uptime, scalability, reliability and availability. DEA Hotspots allows for the deployment of services across multiple availability zones, and system deployment and auto-scaling processes that allow new instances of the system to be deployed within minutes at times of increased user demand. There is redundancy built into the system that ensures there is minimal down time for the user. This is especially important during disaster response when large numbers of users access the system causing peak loads.

During peak times of use, emergency managers can log in to a secure site, isolated from the public site, ensuring they have continued access. 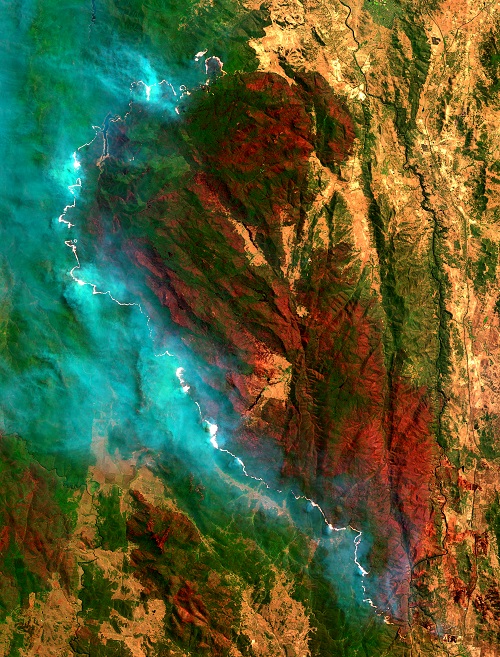 A false colour image taken by the Sentinel 2B satellite of the Orroral Valley fire in the ACT in February 2020. The fire destroyed 80% of Namadgi National Park. Credit: Geoscience Australia.

Over the years, the range of sensors that provide hotspots algorithms has increased, from AVHRR and MODIS to VIIRS and Himawari-8 sensors. Himawari-8 Hotspots was quite a game changer, as it provides data every 10 minutes to our users, which is about 144 updates per day… versus low earth orbit satellites, which may provide 4 to 10 updates per day, depending on where you are in Australia.

GA is always looking for new sources of data and improved algorithms, working with the Bushfire and Natural Hazards Cooperative Research Centre and RMIT to implement near-real time Hotspot detection and processing capabilities. It also investigates sources of data, including the Sentinel 3 Sea and Land Surface Temperature Radiometer instrument from the European Commission.

How much impact has the Hotspots system had?

During the Black Summer bushfires, DEA Hotspots was used by emergency managers to help identify and monitor potential fire locations that posed a possible risk to communities, properties and electrical infrastructure. With the addition of Himawari-8 Hotspots we can now detect potential new bushfires within 17 minutes of the satellite overpass. Since the Himawari-8 satellite is geostationary, it’s continuously collecting data every 10 minutes over the same area.

Robyn Favelle from the NSW Rural Fire Service found the service to be a complementary source of information, saying “We really relied on the Hotspot data because sometimes we didn’t know the fire was there for hours. There was no one close to it.”

The service has also been used by agencies such as the National Aerial Firefighting Centre to allocate resources and by the Department for Energy and Mining in South Australia to monitor electricity infrastructure. 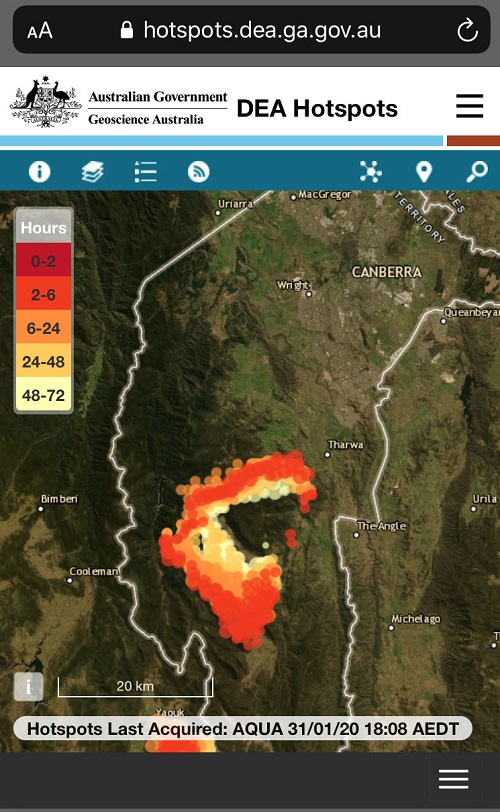 Hotspots over Canberra and Namadji National Park during the Black Summer bushfires 31 January 2020. The colour of the Hotspots represents the time the hotspot was last observed by a passing satellite and does not indicate severity. Credit: Geoscience Australia.

Does cloud cover or smoke affect the system?

The system is only as good as the data it gets, so if there is heavy cloud, smoke or tree canopies that the sensor can’t see through, we do get errors of omission; that is, we don’t detect a hotspot.

Hotspots are potential fires, but can also indicate other phenomena, such as gas flares, heavy industrial complexes and jet contrails. It can potentially detect areas of intense heat that could presage fires, as long as the area is large enough, hot enough, and also dependent on whether a satellite was overhead at the time.

Does the system have any restrictions?

At this stage our hotspot information updates every 10 minutes and is typically available to users within 17 minutes of the satellite overpass. There is some processing time required to acquire, clean and process the data. We are continually looking for ways to improve the system and hope to reduce this lag time by reviewing the backend processes and speed at which the hotspots are processed, and by incorporating other sources of hotspots.

It is important to remember DEA Hotspots is not published in real time and should not be used for safety-of-life decisions. We know there are limitations to detecting hotspots from satellite sensors and I encourage everyone to read the safety message on the DEA Hotspots website and the Product Description. 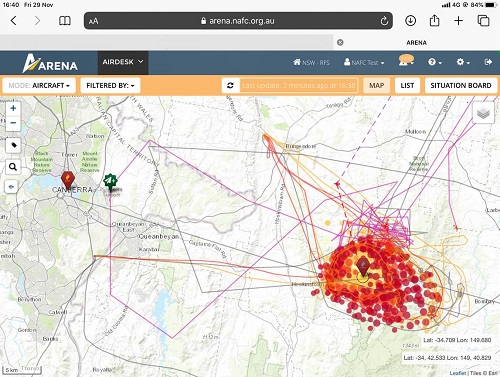 Are there any other developments in the pipeline?

We are hoping to incorporate other sources of hotspots into the system in collaboration with our partner research institutions. While no major development is on the cards, we’re aiming to make small incremental back-end changes over the next few months to help improve the system.

Additionally, we are seeking to develop open-source tools to validate new hotspots from different sources. This will provide a robust process that will enable us to calculate relative performance of hotspot sources to determine whether they are fit for inclusion in DEA Hotspots.

Will data from the recently launched Landsat 9 be incorporated?

As we currently do for Sentinel 2, DEA will seek to incorporate NRT feeds of our Digital Earth Australia ARD products from Landsat 8 and 9 in the near future. These datasets provide high-resolution images that can more precisely define the extent of bushfires.

Are there comparable systems in use overseas?

Some of our algorithms are directly sourced from the NASA Direct Readout Laboratory and processed by the Computing Facility at the University of Maryland. There are comparable systems in use overseas such as SiPongi+, Worldview and the European Forest Fire Information System, to name a few.

Downlinking satellite data in Australia through the Australian National Ground Station Technical Team provides DEA Hotspots a timeliness advantage over similar systems, which can be delayed by relay of the satellite data through ground stations located outside Australia.

DEA Hotspots is one of many sources of information for emergency managers and combines many sources of data. It is cloud computing-based, so it is reliable, scalable and has high availability for our users, provided they have an internet connection.

The DEA Hotspots program welcomes feedback and questions, and can be contacted at earth.observation@ga.gov.au.

This article was first published in the June/July 2022 issue of Position magazine.