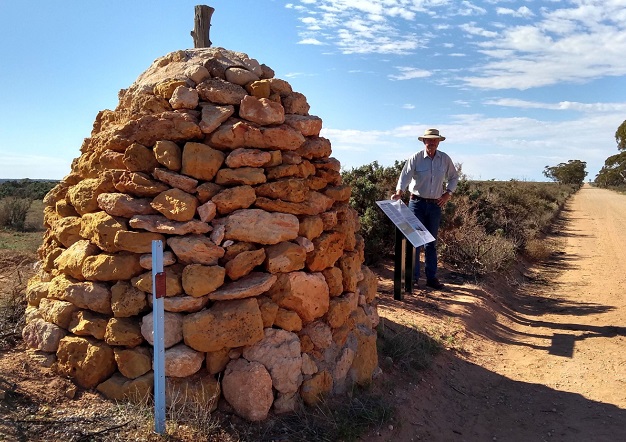 Retired DELWP surveyor and Mildura local John Pitt stands next to the restored White’s Cairn and the new display board. Courtesy SGV/DELWP.

Staff from Surveyor-General Victoria (SGV) have unveiled a display board at White’s Cairn to commemorate the history and significance of the site.

Located on the border of Victoria and South Australia, and roughly two hours west of Mildura, the cairn is one of the most accessible survey marks along the border.

White’s Cairn was first rebuilt in 2001 by local land surveyors from Mildura and Renmark. John Pitt, a now-retired DELWP surveyor, was one of these dedicated locals.

Determined to see this piece of Victorian history restored and preserved, Pitt has completed further restoration work to the stone cairn over the past two years.

Partnering with the local community and SGV, the site was further enhanced with the installation of a display board, with SGV providing plans and funding while Pitt oversaw design and construction. 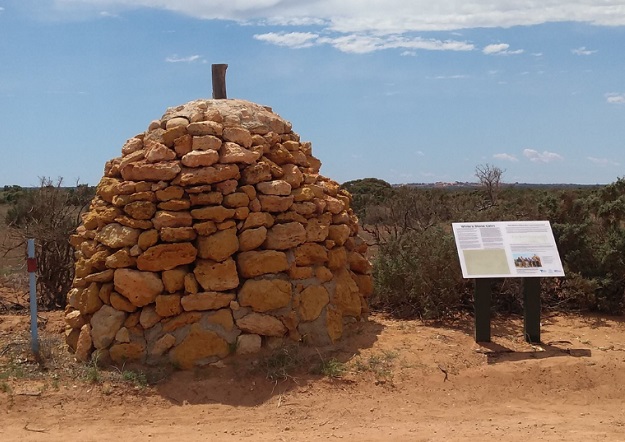 Today the stone cairn replica of the original stands at two metres high. Alongside it, the display board explains the monument’s noteworthy history and how it was reconstructed.

It also tells the story of surveyors Henry Wade and Edward White, who first surveyed the Victoria/South Australia border in 1850.

Edward White’s stone cairn survey marker was first erected over 170 years ago as part of the border survey. The original historical survey mark — a pile of stones 8 feet high — almost never came to be.

White nearly died during his first expedition to the site. Pushed to the brink by dwindling rations and dehydration, he ventured alone to the Murray River seeking assistance for the team. Returning with further supplies, the border line was eventually completed.