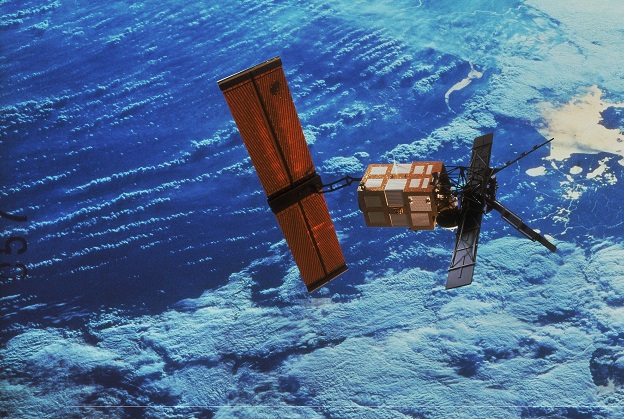 ERS-1 was launched into orbit in July 1991, carrying the Along Track Scanning Radiometer, the brainchild of Ian Barton of the CSIRO Division of Atmospheric Research. Image courtesy ESA.

Hyperspectral imaging is on the cusp of a revolution, as CubeSat missions aim to add to the orbital fleet.

Hyperspectral imaging is an interesting topic. The ability to discriminate minute differences in the colour of different types of rocks leads to much more detailed geological knowledge. But even if you are not passionate about minute differences in rocks, it’s still interesting, because it leads to better predictions about the location of economically interesting ore deposits. The imagery also has application in land management and agriculture, where the ability to make fine discrimination of ground cover is fodder for farmers and other land managers.

Some Australian instruments have been produced. In the 1990s there was a flurry of interest in the technology as it became feasible to build sensors with sufficiently fine spectral resolution. They are still being flown in aircraft by firms such as Hyvista Corporation that have big mining companies as clients. But putting one into a satellite was always a step too far. Too risky, too expensive for private enterprise and certainly too uncertain for governments.

In truth, the technology really was too risky and too expensive. The most mature Australian space hyperspectral project, called the Australian Resources Information and Environmental Satellite (ARIES), was proposed in the late 1990s. It generated considerable interest. But proponents envisaged a 480kg behemoth with a multimillion dollar budget. It never got past a feasibility study.

Recently, however, Australian’s attitude to space has changed. The new Australian Space Agency and a better understanding of the many advantages of a viable space industry have unlocked at least some government funds.

In part, this is because the price/performance mix has tilted in favour of users. It’s now possible to do more, with less. The cornerstone of the new technology is the CubeSat, a satellite made up of modules each of which is a cube 100 mm on a side. The industry describes the satellites in terms of the number of cubes used, so a 3U satellite consists of three cubes.

Typically, CubeSat orbits are allowed to decay over a few years, after which they will burn up in the Earth’s atmosphere. This minimises the problem with space junk. However, several have been launched on missions to the Moon and Mars.

Many of the fundamental needs of satellites, such as thrusters, power supplies, attitude controllers and communications systems can be readily purchased off-the-shelf to form a satellite bus, the part of the satellites that carries the payload. The result is that developers can focus their R&D budget on the payload itself.

The advantages are not only economic. By using and re-using the components of the bus, engineers can refine their designs. This makes the satellite itself more reliable.

This is a non-trivial issue. Currently, 3,200 CubeSats projects have been announced around the world. Not all make it into orbit. In a recent paper, Christopher Capon, the chief executive of Space Services Australia, points out that 10% of miniaturised satellites are dead on arrival — they fail before they reach orbit. An additional 40% of the remainder experience a partial failure on orbit. Moreover, Capon says that if you confine yourself to university-led missions and new market entrants, only 16% of missions are completely successful. This is not surprising — space is hard; experience counts.

Adding to the hyper

It was this insight that drove the creation of the ARC Training Centre for CubeSats, UAVs and their Applications. One of the cornerstones of CUAVA’s mission is to gain that experience by training a cadre of engineers with real hands-on experience in building satellites. To that end, the Centre will fly three satellites before the end of 2022. One consequence will be the development of a revolutionary hyperspectral imager that may well see a production model in space before the end of the decade.

The director of the Centre is Iver Cairns from the University of Sydney. Together with Andrew Dempster at University of New South Wales, he is a principal investigator for the missions.

The first in the series of satellite, CUAVA-1, was deployed in October from the International Space Station. It is a 3U CubeSat with the cubes stacked one on top of the other, with four whip antennae at the base. The sides of the satellite are covered with nine solar panels. A small telescope pokes through one side. 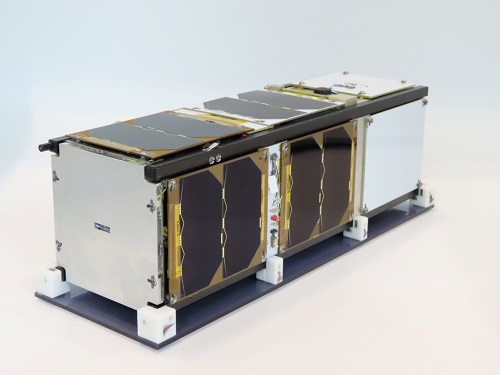 Most of the control systems for the satellite were purchased off the shelf. It has an electrical power system from GOMspace, a command and data handling system and a communications system from Innovative Solutions in Space, and a gyroscope-based Attitude Control System from CubeSpace. These systems will also be used for CUAVA-2. However, CUAVA -3 will likely feature a new bus, and possibly a plasma thruster.

CUAVA-1 has a payload of four instruments, of which the Imager, Spectrograph and TinyTol Instrument (ISTI) will be most interesting to readers. ISTI consists of a novel RGB camera and spectrometer assembly. It is a pathfinder towards a practical hyperspectral imager that is small enough to fit into a CubeSat.

ISTI’s control software runs on a Raspberry Pi single-board computer. The Pi is imbedded in the ISTI Controller Board, which provides power, debugging and communications services. The Pi has two camera interfaces as standard; one is assigned to the hyperspectral instrument, the other to the TinyTol telescope

The current concept for the instrument is to use a CCD and fibre optic bundle to simultaneously capture an RGB image and a hyperspectral image. In the ISTI-1 proof of concept there will only be one fibre optic, connected to a spectrograph. This fibre optic will enable measurement in the spectrum in the central region of the RGB image.

ISTI-2, which will fly in 2022, will have a full fibre bundle feeding the spectrograph. It will offer 20-metre spatial resolution and 1nm to 20nm spectral resolution. 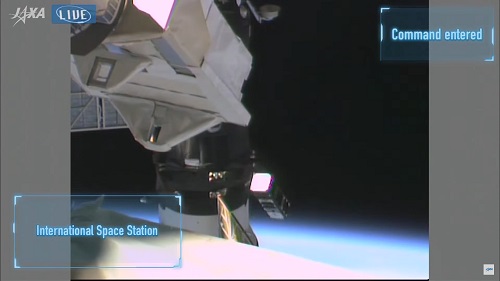 CUAVA-1 was released into orbit in October 2021. Image courtesy CUAVA.

Graduates from the ISTI project will have several opportunities over the next few years, apart from any follow-on work from ISTI itself. For instance, the SmartSatCRC, along with CSIRO and University of Canberra is developing a remote sensing satellite called AquaWatch — a proposal to use satellites to monitor water quality in inland and coastal waterbodies.

Meanwhile in Queensland, Fireball International has a plan to launch a constellation of 24 satellites equipped with infra-red sensors. Fireball proposes to use the data from the satellites, coupled with terrestrial infrastructure, to provide firefighters with near-instant warning of bushfires.

Moreover, at least one Earth observation project will be funded under the $500,000 UK-Australia Space Bridge program. IceCube will monitor Antarctic sea-ice using a small satellite. The project is a collaboration between the universities of New South Wales, Sydney and Tasmania, along with Spire Global and the British Antarctic Survey.

The current generation of remote sensing spacecraft are by no means the first into orbit. In fact, Australian researchers have been instrumental in a number of missions led by other countries, notably the UK.

The most significant of these was the Along Track Scanning Radiometer (ATSR) instrument, which became part of the European ERS-1 satellite, launched in 1991. The program lasted until 2011 when ERS-2 was finally abandoned on-orbit, although ATSR-2 had been switched off in 2008 following mechanical problems with its scanning mirror.

ATSR was the brainchild of Ian Barton, then at the CSIRO Division of Atmospheric Research. In 1982 Barton proposed that infrared measurement of the ground could be improved by measuring the radiance at a point on the surface twice — once in the forward direction (along the track) at an angle of 47 degrees, and then, two minutes later, directly above the same point. In this way it was possible to remove the atmospheric distortion that had contaminated earlier infrared measurements from space.

This led to significant improvement of sea surface temperature readings and thus in calculations of the rate of heat transfer between the ocean and the atmosphere. This in turn led to greater understanding of climatic changes such as the El Niño/La Niña cycle that has such profound implications for Australian agriculture.

Construction of the ATSR was undertaken at the Rutherford Appleton Laboratory in the UK. Ken McCracken, later the foundation head of CSIRO’s Office of Space Science and Applications, and Stan Schaetzel, then the Technical Director of Hawker de Havilland in Sydney, obtained funding from the federal government for the construction of the Digital Electronics Unit of the ATSR and for a ground station to receive data from the satellite.

Jon Fairall is a Sydney-based writer and founder and former editor of Position magazine.

This article was first published in issue 116 of Position magazine.

Vendor focus: Anditi
In the lead up to Locate22 in May, we’re highlighting some...

Make sure you don’t miss Locate22
Here’s a preview of what you’ll see, learn and experienc...

CASA drafts 10-year safety roadmap for drones
The roadmap aims to provide a plan to integrate drones into ...