Dragonflies could be the future of drones 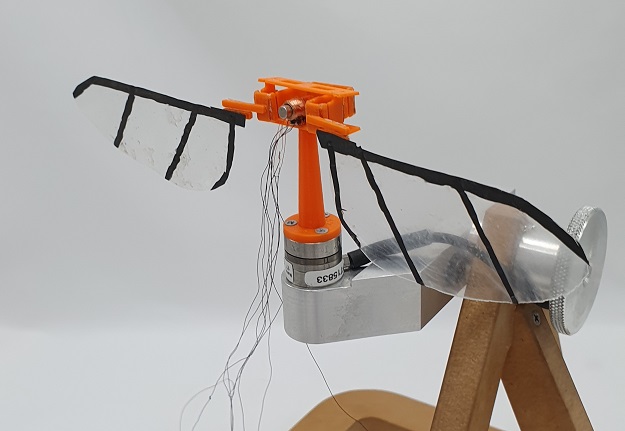 An experimental flapping-wing design modelled on the wings of dragonflies. Courtesy University of South Australia.

In research that could lead to more efficient flapping-wing drones, University of South Australia PhD students are investigating the aerodynamic properties of dragonfly wings.

They had to develop a novel technique for photographing the specimens (which are kept in glass display cases), before using the data to construct 3D models of the bodies and wings and drawing comparisons between them.

According to the students’ supervisor, UniSA Professor of Sensor Systems, Javaan Chahl, even after 300 million years of evolution dragonflies are the ultimate flying machine and an “apex insect flyer”.

“Dragonflies are supremely efficient in all areas of flying. They need to be. After emerging from under water until their death (up to six months), male dragonflies are involved in perpetual, dangerous combat against male rivals,” said Professor Chahl.

“Mating requires an aerial pursuit of females and they are constantly avoiding predators. Their flying abilities have evolved over millions of years to ensure they survive.

“They can turn quickly at high speeds and take off while carrying more than three times their own body weight. They are also one of nature’s most effective predators, targeting, chasing and capturing their prey with a 95% success rate.”

According to the researchers, drones with dragonfly-like high lift-to-drag ratio wings could be ideally suited to many tasks, such as lifting and delivering unbalanced loads, operating near people (without the danger of spinning rotors), investigating sensitive environments and conducting long-duration missions that call for excellent power economy.

The research has been published in the journal Drones.