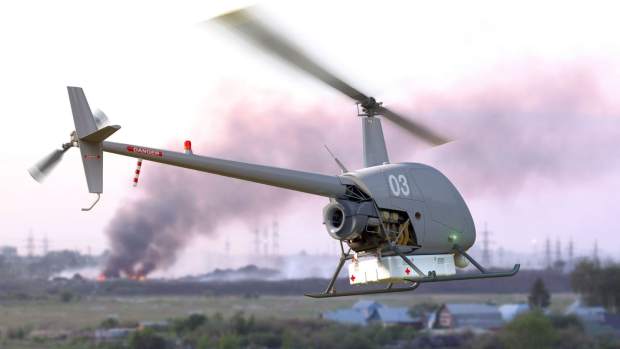 Multinational unmanned aerial, ground and surface vehicle company UAVOS has converted a Robinson R22 manned helicopter into unmanned aircraft R-22 as a long-range cargo delivery drone. It features a payload capacity of 180 kilograms or 400 pounds and a travel distance of up to 1,020 km.

The R-22 unmanned helicopter is designed for both cargo delivery and humanitarian / disaster relief applications. Failure to deliver vital equipment under austere operating conditions and timelines can incur substantial fiscal costs, making the unmanned Robinson’s all weather capabilities particularly valuable. This also opens up new possibilities for safely and efficiently transporting goods in a variety of industries.

Another is the disaster relief mission – where the R-22 can bring food, fuel, water, supplies, medicine, communications and even electrical power to areas that are hard-hit by natural or man-made disasters.

Due to its long endurance capability (6 hours), and ability to operate in harsh weather conditions in both land and maritime environments, the R-22 can…

Specifications of the Robinson UAS platform include: