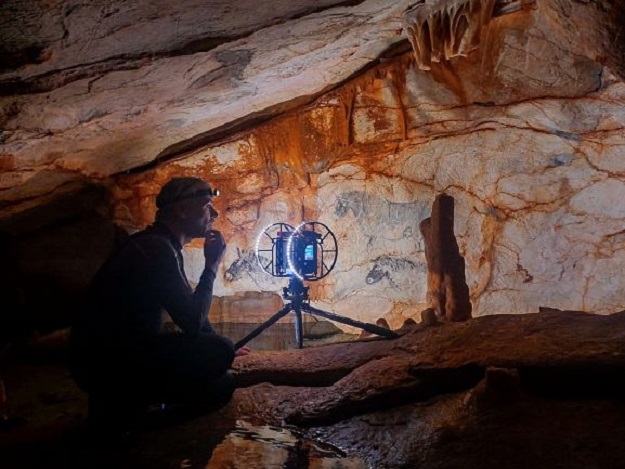 Cosquer Cave’s horse panel, threatened by rising sea levels, has been digitally ‘saved’ by Fugro at a resolution of 0.1 mm. Image courtesy of Luc Vanrell.

Fugro has been awarded a new contract by the French Ministry of Culture to finish the scanning of the famous Cosquer Cave, which contains paintings and engravings dating back to 27,000 BCE.

The cave, located in the Urgonian limestone at Cap Morgiou near Marseille, is being slowly swamped by rising sea levels.

Fugro will use its photogrammetric, 3D laser scanning and lighting technology to digitise and map the cave and its 177 irreplaceable artworks, creating a permanent digital record for future generations.

The company has teamed up with Immadras, a French professional diving company, to conduct the work.

The artwork above the water’s surface is recorded in full colour 0.1 mm resolution, while a lower resolution will used for the underwater volume, which makes up approximately two-thirds of the cavity.

Once the scanning is complete, Fugro will produce a georeferenced 3D model of the entire cave structure that will be made available for archaeological, paleontological and climatological research.

Also to be 3D modelled will be the terrain around the cave’s entrance, 37 metres below sea level, and the narrow, 120-metre-long underwater tunnel leading up to the cave.

Fugro’s Bertrand Chazaly conducted the first 3D survey in September 2010 and so far has undertaken more than 70 dives. In May he returned to the cave with Immadras’ manager for the cave project, Luc Vanrell, to begin a further 45 dives.

“Many of the paintings of horses and hands are perilously close to the rising water level,” said Chazaly.

“Fugro’s job is to map and record these precious works of art before they are lost forever, and to model the underwater structure.

“Archaeologists will then use our geo-data to gain a better understanding of how prehistoric humans lived in the cave and the positioning of the various groups of paintings.”

The project is scheduled for completion early next year.