The World is on the Move Again 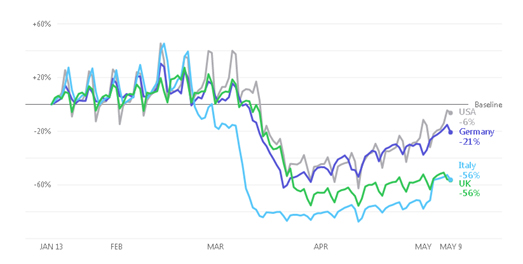 Google, Apple and Facebook all provide data on how much people are moving during this epidemic – in comparison to their normal movements before the emergence of coronavirus. The mobility reports published by all three of the tech giants suggest that around the world people are beginning to show less discipline in restricting their movements.

An article in the UK edition of The Guardian tells of a unique, crowdsourced and cartographic adaptation to coronavirus in the archaelogical field.

Not a blog per se, but this project mapping field recordings of wilderness sites and nature reserves around the globe has yielded a spectacular interactive map of professional-quality field recordings.

Detail from Martin Vargic, “Britannia Under the Waves.”

A recent issue of the UK Guardian had an interview with Slovak designer Martin Vargic, whom you may remember for his 2015 book Vargic’s Miscellany of Curious Maps. In this interview, Vargic talks about his various projects—he’s been doing this since he was eight, and was a teenager when Miscellany was published.

The Sounds of an Epidemic

Another map showcasing field recordings, Pete Stollery has created a Google Earth sound map which aims to capture the new soundscapes which have emerged as a result of the huge reduction in normal human activity around the globe. The Covid-19 Sound Map includes recordings from all across the world. These sounds include recordings of now empty city centers, people clapping for health workers, croaking frogs and traffic free streets.

Australia’s space sector needs more than science an...
A call to arms to the professional sector to engage with Aus...